I get quite a few spam comments on this blog which I have to delete. But I really like the tone of voice in this one. I think I'd like to get letters like this from my over-serious bank.


"Good day, sun shines!
There have been times of hardship when I felt unhappy missing knowledge about opportunities of getting high yields on investments. I was a dump and downright stupid person.
I have never thought that there weren't any need in large starting capital.
Now, I'm happy and lucky, I begin take up real money.
It's all about how to select a proper companion who uses your money in a right way - that is incorporate it in real deals, parts and divides the profit with me."


Mind you, they wouldn't get my money.

Thinking of Gene Z's chess set, this clock bought a few years ago from Habitat has a nice diagramming reference too. It's clever in a recursive kind of way, but not instructional in the way his chess set is.

Broccoli or pants: what's going on?

Paypal just asked me to fill in a questionnaire. This was the first screen - is this some kind of filter to check what browser I'm using, or to check if I'm not in an immature mood? Anyone know?

Each piece on this chess set, designed by Gene Zelazny, is a diagram of how it moves.

Gene Zelazny is Director of Visual Communications for McKinsey & Company, and I corresponded with him for a while when they were a client a few years back in the mid-90s. He's been there for many years (he started in 1961 and I think he's still there), and has trained generations of management consultants to do those diagrams they all love - I saw a great collection he compiled of visual metaphors used in management communications, but I don't think he's published it anywhere (he has several books out on the design of charts and presentations).

As a sideline he designs wonderful chess sets - I mentioned to him Ken Garland's interest in board game design, and he sent me one of his diagrammatic sets to pass on to Ken (which I reluctantly did). Here's a link to his chess set gallery.

Sorry about the quality of this image taken quickly on the move. It's a rare example of figure-ground problem in action. Perhaps you got it straight away but it took a little while for me to see the image here. I can't think why in retrospect - but, of course, once you've recognised something it's almost impossible to erase your understanding. That's why we need to test icons - the designer knows what they mean, and can never see them fresh.

If you've ever wondered what is covered by your buildings insurance rather than your contents insurance, here's a nice definition from Aviva's website:

A quote from the Arts Council's Get a Plan accessibility website:
"Did you know…40% of the population cannot easily read print if the type size is below 12 pt?"

That would mean 40% of the population couldn't read a newspaper, let alone the instructions on a packet of pills, or the small print on their car insurance.

Or the tests they use to measure literacy... wait a minute - could this explain the apparently low levels of literacy in the UK?

Well, only if the figure was true. The website owner is trying to trace the origin for me, but in the meantime here is a quote from an RNIB report:
'The prevalence in those aged 16+ of at least S9 (difficulty reading ordinary newsprint) was 2.8%'  1998/99 Survey of the Needs and Lifestyles of Visually Impaired Adults. (RNIB/ONS 2000) quoted in Tate et al, The prevalence of visual impairment in the UK (RNIB 2005).

Newsprint is usually about 9pt. All figures for visual impairment get significantly worse for people aged 75+. In this survey only 14% of them, not 40%, reported problems reading newsprint.

A few years ago I was at a talk on transport design organised by the Design Business Association - one questioner asked why it was that the icons were the same in every station or airport you went to. It's so boring and uncreative, he said, and just a cop out by lazy designers.

The same goes for the alphabet too, and the practice of writing from left to right. It's lazy blogging, I know, but I thought you'd be interested in this item from The Onion I found on the Information Design Watch blog from Dynamic Diagrams (always very good).

I had an account with First Direct for a short while about ten years ago (I used to open all sorts of accounts just to collect documents that might be relevant to clients we were working for). Now I'm opening another account with them, it turns out they haven't forgotten - they asked me the answers to security questions I set up in around 1998. I couldn't remember my memorable date, my memorable address or my memorable name.

So now I have to choose two new questions to remember at various random points in the future where it will really matter (such as when I have lost my card, or can't log on). Who thinks these things up? 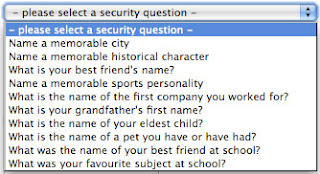 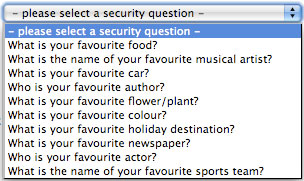 Apostrophes in road signs, and other petitions to the Prime Minister

The e-petitions section on the Number 10 website continues to flourish - one current petition is 'We the undersigned petition the Prime Minister to introduce a nationwide policy enforcing apostrophe use in road signs, applying to all local councils.'

There is still time to sign it, if this is something that keeps you awake at night. Or if you have ever got lost trying to find King's Road when all you can find is Kings Road, which is obviously somewhere else entirely.

The Conservative party recently announced plans to offer a £1m prize to the best use of social networking to harness the collective wisdom of the population in policy-making.

Judging by a good proportion of the e-petitions on the Number 10 website this is a slightly scary idea. Here's a small selection that caught my eye (mind you, I've included one that I would definitely sign):

The strange websites of thought leaders

My mention of Robert de Beaugrande's website reminds me of some others I've encountered from prominent thinkers where there's a strange disconnect between the quality of the thinking and the visual design.


Here's a page from the website of Christopher Alexander, something of a hero of mine for his work on pattern languages. Perhaps I'm reacting like a modernist architect might to some of the vernacular structures he celebrates... I'll have to ponder that one.

I picked up Robert de Beaugrande's Text production the other day, and thought I'd look a little more at the author. I've found his account of how writers deal with the problem of linearity (that is, the problem that language is linear, but what we want to talk about is not) really helpful in explaining the contribution of typography and layout. He doesn't make the connection himself, although he does apply his ideas to punctuation.

As readers we imagine what writers are like from their work. So visiting Robert's website I was surprised to find a highly individual, committed and even eccentric scholar - a pioneer of discourse linguistics but not an establishment academic. It's full of pictures of him on his travels around the world (and in company with distinguished linguists), and full of digs at Cambridge University Press, Microsoft, the Tories and other elitist groups he's taken against. Quite strange in many ways - but sincere and committed. He was obviously very deeply engaged in thinking about language, how it works in everyday life, how it should be studied.

He spent a lot of time in recent years scanning in his major publications, including the books, to make them freely available (and free) on his website.

I use the past tense because he died last year - I can't find a biography, just this short obituary, so I don't know how old he was. Not old enough, I suspect.

If I may be so bold

This is a nice demonstration of encroaching-boldness syndrome from Barclay's banking website. Everything is very important, except for 'This is the', 'of', 'for the' and 'They are presented in'.