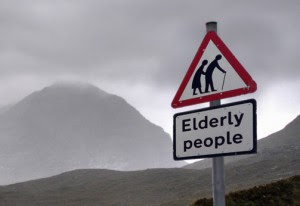 I blogged about this sign a while back. Apparently it is patronising and disparaging to old people, and Spring Chicken organised a design competition for a replacement. They are an online retailer/advocate of well-designed products aimed at older people.

The results have been around for a few months but I've only just spotted them. Have a look at the outcomes on their website: http://www.springchicken.co.uk/signofthetimes/

The designers have had a lot of fun with the brief and almost all the entries are of the designer-as-cartoonist genre.

For example, this one by Margaret Calvert and Marion Deuchars is based on the children crossing sign (which was in fact originally designed by Calvert, although she was not responsible for the old people sign): 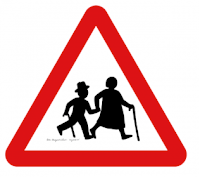 And this one was designed by Neal Lankester: 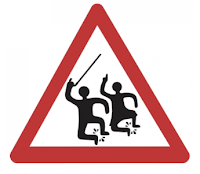 I had a chuckle at these and many others, but there are only two which, for me, take the brief seriously and might be contenders for actual use.

This first one, designed by Else, nicely recognises that the issue may not be physical disability but confusion and dementia: 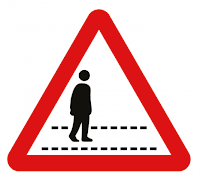 This entry, from Together Design, simply amends the current one to reduce the degree of stooping. By replacing the walking stick with an umbrella, continuity is maintained, but with less stigma: 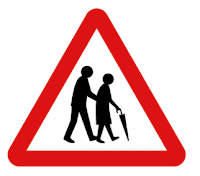 But actually I question why the existing sign is thought to be patronising. It is not meant to be a social comment but a warning to drivers of a danger ahead. The danger is not old people per se, but people who are physically challenged and therefore slow to react, and who may well be recognised by their stooping gait and use of a stick. Signs have to be cliched and exaggerated to be instantly recognised by drivers.

One more thing... that word 'elderly' is odd. Do they think the word 'old' is too stark or bleak?

This is the British habit of softening the impact of the simple Anglo-Saxon with a Latin elaboration, and it's not necessary.

And another thing. I nicked the photograph at the top from Spring Chicken's website. What's remarkable for me is that I might find these elderly people half way up a mountain. Good for them.