I confess to googling myself, and have discovered I am a PG Wodehouse minor character. 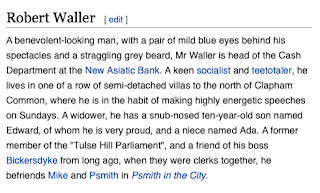 Well, I'll settle for 'a benevolent-looking man, with a pair of mild blue eyes behind his spectacles'. Could be worse...

If you try to choose a TV you could find yourself comparing the merits of a LG 55UN80006LA, Samsung UE50TU8507UXXU or a Sony KD55XH8096BU. Or how about a Panasonic TX-50HX580B?
You have no hope of retaining any of these model names in your head. So how are you supposed to think through your decision, read reviews and find the model online, or check where the cheapest price is. You can cut and paste and search, but the algorithms are ahead of you and insert other models into the search results.
The electronics industry could learn from What3words. This is the brilliant app that assigns a unique set of three random words to each 3m square of the planet. So GPS co-ordinates 51.520847, -0.19552100 become filled.count.soap.
You could ask... why not just give the GPS coordinates? Well just try reading those out accurately when you're calling mountain rescue. What3words is a brilliant tool that understands that most humans can remember words a lot better than they remember numbers. It's information design, actually.
So I look forward to the day when I can choose my next TV that way. How about a Panasonic boot.fidget.balloon or a Samsung stapler.butterfly.fruitcake? 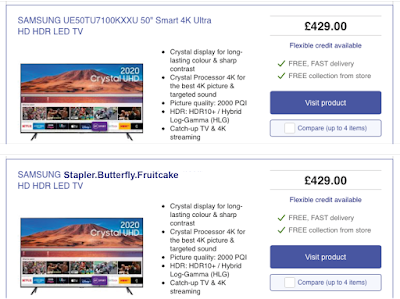 Seriously, which of these is the easiest to remember?

Which? best buys: I don't buy this format

Which? the consumer testing magazine and website, can be remarkably dense sometimes. We were looking at food mixers and Kenwood have done brilliantly in bagging the top four Best Buy slots. 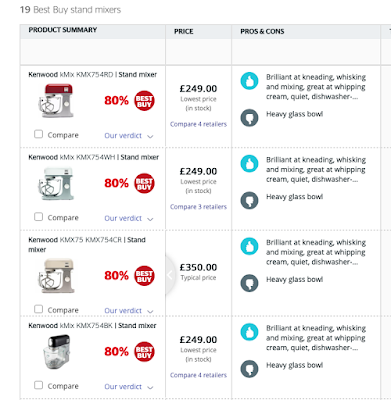 Well done, Kenwood. The red one was best, then the white one, then the cream-coloured one, then the black one. Yes, they are the same mixer in different colours.
Assuming they don't actually test the different colours separately, I reckon this is an information design problem. This format doesn't allow them to do the sensible thing and present this as one product with colour variants.
They could just call it the 'Kenwood KMix KMX754...', and the next column could list the colour variants.

A friend remarked approvingly that I used the word 'shit' in a recent post. It's odd how words shift their position on the spectrum of rudery (or should that be prudery).
My late mother, who would have given Hyacinth Bucket a run for her money (although she was the real thing), would use the word freely (as in 'I've put chicken shit on my roses'), as a straight synonym for manure.
I always think that when a newspaper prints a coyly bleeped word like 'sh*t' it forces me to think of all the rude words I know that might fit - not very edifying. Sometimes I'm stumped which makes me feel rather naïve.
I mentioned this in this blog a few years ago, after seeing the word 'w***e' in a headline. Click here for the answer, which disappointingly isn't even rude (unless someone is using to describe you).

End of the Argos catalogue, end of an era

The Argos catalogue is no more. If you are the reader of this blog who lives outside the UK, I should explain that this was like a mail order catalogue but no mailing was involved. Argos has stores in every town, where you can/could browse a catalogue and order every kind of stuff, which was stored in a back room, mostly not on display. It inevitably moved online, and after acquisition by Sainsbury's the stores are moving to supermarkets.
Argos does a remarkable job of making a wide range of stuff available in small towns which now longer have specialist shops. At one of our early summer schools the host institution failed to supply a projector... so we popped out to Argos and bought the one we still use.
Some of the vox pop comments in radio interviews struck a chord. Most homes had an Argos catalogue and in the pre-internet days it gave kids access to window-shopping. Families would browse the catalogue together and plan purchases, voice their aspirations and drop birthday present hints. 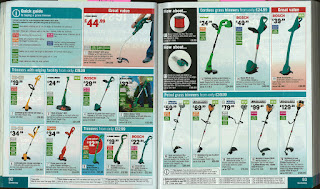 I'm not sure what the current figures are, but when Argos was a client in the 2000s the figures were astonishing and surprising: for example, they were one of the largest jewellers, furniture retailers and suppliers of electrical goods. Most of the photographers in Milton Keynes where they were based seemed to be sustained by product shots for the catalogue.
The production of the catalogue was a major operation involving five or six printing plants around Europe, and several binderies. They were delivered on pallets near the door of Argos stores for people to take home. When we asked about recycled paper it emerged that there wasn't enough recycled paper in Europe to print the Argos catalogue.
Every now and again they would ask us to review a particular aspect of the catalogue and propose improvements. We treated these projects as exercises in decision support, helping people to choose what features and qualities they needed, and which products had them. We would produce beautifully crafted explanations which were then made rather naffer by in-house designers to fit in with the brash Argos brand.
It was a fascinating encounter with the world of retail. For example, Good Better Best: a typical product range has to have basic products (good), an average products (better) and a top end (best). Some customers will invariably buy from one of these relative price points.
When we worked on the Argos jewellery section, it included a diamond ring priced well over £3,000  although the average jewellery purchase was under £10. No one I spoke to could remember the expensive ring ever being sold but its job was to be Best and lift the image of the Argos jewellery brand. The recipient of a gifted ring could not know for sure that the giver was a cheapskate.