Ten years ago I posted about the 90th anniversary of Rupert Bear. Well, it's now his centenary and there's an exhibition planned for 7th November in Canterbury, home of his creator Mary Tourtel. And Royal Mail has issued a special set of stamps.
I recently bought this artwork at auction. It claimed to be an original by Alfred Bestall, the artist who created the famous multi-layered format that I see as an information design archetype. I know it couldn't be, as it's dated 1994, and Bestall died in 1986. 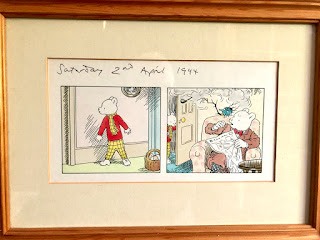 It turns out to be artwork used when this particularly story was re-used by the Daily Express in 1994. It is a copy of Bestall's monochrome artwork which has been hand coloured for the republication.
This information was very helpfully supplied to me by John Beck, Secretary of the Followers of Rupert Bear. He commented:

"An interesting item and the story is indeed Bestall's and the date noted above it is in the hand of Ian Robertson who was the Rupert Editor at the time this was reprinted in the Express.
The story is Rupert and Raggety and the reprinted story used 27 of the original 40 panels.
It would appear that the Express have used a b/w copy of Bestall's original artwork and someone has coloured it for reproduction in the newspaper. Who the colourist is I do not know but they were using Gina Hart as a colourist at the time so it could be she.
How this escaped from their archives I cannot speculate but it is an interesting and unique item."