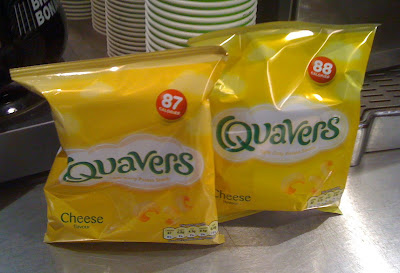 Judy Delin's eagle eye spotted this odd couple in the uni cafeteria the other day. The sell-by dates are different, showing that the higher number is the newer.

I know it's a stretch, but could we think it ironic that this supposedly low calory snack now carries a picture of the bingo ball traditionally known as 'two fat ladies'.

Not very politically correct, that term, as the Daily Mail (who else?) pointed out in one of their regular 'PC gone mad' stories last year.

"A council which has banned the bingo phrases ‘two fat ladies’ and ‘legs eleven’ in case players are offended and take legal action was criticised for being politically correct yesterday.
Sudbury Town Council in Suffolk fears it could be sued by overweight players or women who find the terms sexist.
It has advised bingo caller John Sayers, 75, to revert to using the number ‘88’ instead of ‘two fat ladies’ and 11 for ‘legs eleven’."